When I moved the summer of 2013 into the basement of a lake house near Northwestern the semester before I graduated, i stole something; sort of.

The girl who lived there before me left a gigantic collage on the wall in the bathroom of images and quotes. One particular piece caught my eye.  It was written on a torn-out page of a novel: 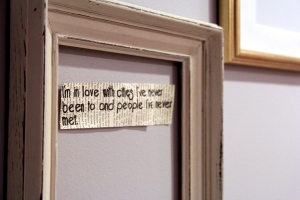 “I’m in love with cities I’ve never been to and people I’ve never met.” I tore it off the wall and saved it. Its been hanging in my room ever since. When I would read it, i prayed that the Lord would start softening the hearts of the people in the city that I would end up living in overseas. Little did I realize how true that quote would become to me in the coming years.

I’ve now been home for almost 4 months. Beirut you have an unbelievably deep place in my heart.  I miss it as much as I did when the tears rolled down my cheeks staring out the window of the airplane while the sun rose over the dimly lit city. Leaving Lebanon with no definite return date was heart breaking for a long three weeks before departure, but even more real as we got higher and farther from the city. I had just spent an incalculable amount of myself building a life the previous ten months so far from anything I’ve ever known because the Lord worked in my heart through countless prayers for years prior.

When I got back to America, my neighbor asked how it had been and after telling him he said that he could tell how much I loved it. That my joy showed through my smile and that it was evident it was where I was meant to be. He said he was so glad I found a place where I could feel that.

A few weeks ago I met with a pastor at my church who said, “I just don’t get why you love it so much. Its so clear how passionate you are.” It was encouraging to me that my love for the Middle East and what had happened in the last year was so evident to people around me. What an incredible answered prayer to be given the opportunity to not just tell others but show them how God works in our hearts. 4 and a half years ago I had no desire to go anywhere outside of America but one little girl changed everything for me.

Tonight as I read the quote hanging on my wall, tears roll down my cheeks again, baffled at how much has happened in a year. I think I finally understand what Paul means when he wrote:

11 For I long to see you, that I may impart to you some spiritual gift to strengthen you— 12 that is, that we may be mutually encouraged by each other’s faith, both yours and mine. 13 I do not want you to be unaware, brothers,[a] that I have often intended to come to you (but thus far have been prevented), in order that I may reap some harvest among you as well as among the rest of the Gentiles. Rom 1:11-13

I feel this tension of being so far from where I want to be, yet obedient to God’s call to stay right where he has me. I am excited and expectant to where God will lead me in this journey, how he will use me and I try to pray this same quote to effect me in Huntington for the next year and a half like it did in Lebanon.

i love Jesus with my whole heart. ecstasy is the purest form of bliss waiting to be experienced by the human race as a whole. When Jesus penetrates your heart, soul and mind your body falls fast alongside the joy that shines brighter than any light created. seek Jesus as the way the truth and the life.. only by him can this bliss be achieved. View All Posts

every day is a new day to fight for whats right

There was an error retrieving images from Instagram. An attempt will be remade in a few minutes.